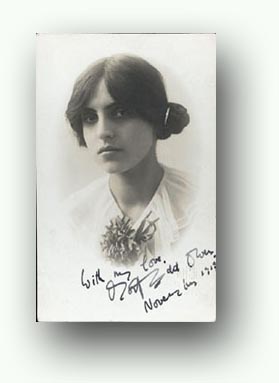 Imagine the musical talents of a composer like Karl Jenkins of Penclawdd and of a mezzo-soprano like Katherine Jenkins of Neath - but combined in one and the same person.  That was Morfydd Owen, who died aged 26 in tragic and somewhat mysterious circumstances in Mumbles nearly a century ago, and whose grave with a red sandstone column stands at the top of Oystermouth cemetery.


Born into a Welsh-speaking home in Treforest in 1891, Morfydd showed musical ability from an early age.  She won a scholarship to , graduating in 1912, and that year was admitted to the Gorsedd of Bards at the National Eisteddfod at Wrexham, adding the Bardic name Llwyn.  In 1913 Morfydd Llwyn Owen won first prize for her singing at the Swansea Eisteddfod.  She won a scholarship to ’s Royal Academy of Music, where she was an outstanding student, winning prizes for music and composition.  She composed choral works, chamber music, piano and orchestral works, songs and hymn tunes, becoming an Associate of the Royal Academy of Music.


But in she moved in two quite distinct circles.  Besides respectable friends at the Welsh Presbyterian Chapel in , in Hampstead she mixed with people in Bohemian circles, such as the novelist and poet D.H. Lawrence and the expatriate American poet Ezra Pound.  She was friendly with Eliot Crawshay-Williams MP, Churchill‘s parliamentary private secretary, whose career was abruptly terminated when he was named in a divorce petition.


Friends from the Welsh Presbyterian Chapel were shocked when on 6 February 1917 at Marylebone registry office Morfydd suddenly married the Gowerton-born atheist and psychoanalyst Dr Ernest Jones, at a time when psychoanalysis was viewed with much suspicion.  Jones, known for his flamboyant lifestyle, had proposed on only their third meeting.


Although Morfydd performed in 1917 at the “The Eisteddfod of the Black Chair” (so called because the winner Hedd Wyn had been killed in action), marriage curtailed her musical activities, with many weekends spent as hostess to Jones’s psychoanalyst friends at his cottage in .


The First World War precluded her taking up a Fellowship from the of to study the folk music of Russia, Norway and Finland, so Jones took her on holiday to Gower, which she had not visited previously.  In Thistleboon, Mumbles, next to the property belonging to Catherine Zeta-Jones and Michael Douglas, is an older house called Craig-y-môr, where Jones’s widowed father was living in the summer of 1918.


The couple stayed there and visited Caswell, Langland, Sketty, and Swansea Market, and had a meal at the Kardomah in .  But Morfydd was taken ill with appendicitis, which required an operation, although instead using Swansea Infirmary it seems that the operation took place at Craig-y-môr.  Tragically chloroform instead of ether was used as the anaesthetic, and Morfydd Llwyn Owen died on 7 September 1918, just weeks before her 27th birthday.  Ernest Jones had acted as anesthetist, a situation that would not be permitted now.  Had it not been wartime one imagines there would have been some investigation into the circumstances.


At the top of Oystermouth cemetery her grave is marked with a red sandstone column bearing a quotation from Goethe’s Faust, for German was the language of Sigmund Freud and the leading psychoanalysts.  In translation this can be rendered ‘Here the indescribable consequences (of love) have been fulfilled’.  Her obituary in Y Gorlan, the journal of the Welsh Presbyterian chapel, commented: ‘Oh, Death! We knew that thou were blind, but in striking Morfydd thou hast taught us that thou art also deaf’.


In mid-September ’s Taliesin Theatre hosts a dance theatre production entitled “I Loved You and I Loved You”.  This is based on the story of Morfydd Owen, ’s brilliant young composer, who died tragically in Mumbles nearly 100 years ago.
Posted by Unknown at 04:00